NICOMENTHYL is the result of Dr Gabriele Segalla’s idea developed in 1992 under the name of Cryotermol. The idea in was to synthesize a new molecular complex capable of performing a bivalent or “contradictory” cosmetic action, i.e. the same action resulting from the simultaneous contact of a hot and cold body with the skin, so as to produce a sort of pulsing, toning, and normalising micro-massage to counter some common skin blemishes such as cellulitis, excessive loss of hair, tissue relaxation, etc. 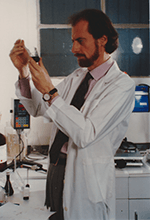 Nicotinic acid (also known as Vitamin B3 or Niacin), already known for efficiently activating cutaneous microcirculation (vasodilating effect), was chosen as the primary key reagent. Its derivatives are used in cosmetology for massage, anti-cellulitis products, etc.

Dr Segalla identified a method to produce the first few grams of what would later be called Cryotermol (from the Greek kryos: cold and thermon: hot).

THE FIRST STEP ON THE MARKET

The new compound not only featured excellent cutaneous microcirculation reactivation properties but soon appeared to be more promising than expected.

In addition to its high bio-compatibility and quick absorption properties through the stratum corneum of the skin, Cryotermol performs an efficient cutaneous micro-massage, which provides a pleasant sense of wellness (simultaneous cold-hot effect) on the area of application.

Cryotermol was mostly used in hair loss prevention (shampoo, lotions, hair conditioners) and anti-cellulitis products.
Thus, various Cryotermol-based cosmetics made their first appearance on the Italian and international markets in the ‘90s.

THE PURSUIT OF PURITY 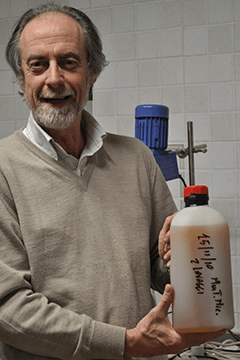 The synthesis methods used those days were not capable of providing a sufficiently pure product, but only a mixture of menthyl nicotinate, menthol, and various “impurities”, consisting mainly of methyl nicotinate (too hyperaemic or sensitising for some individuals) and various terpene by-products resulting from menthol chemical degradation, which could not be easily separated from the pure molecule with the techniques used back then. 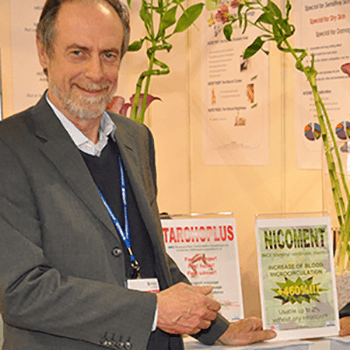 Nicoment (another commercial name for the product), for example, was one of these “mixtures”, which Multichem synthesised for an Italian distributor of active ingredients in 2010/2012.

During the following years, Dr Segalla continued his research for a new synthesis method capable of producing high-purity menthyl nicotinate. 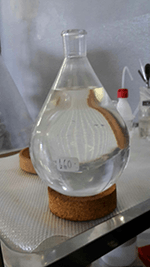 In 2013, Dr Segalla’s new interest in the use of menthyl nicotinate in the pharmaceutical industry led him to intensify his research. Only then, after many years of hard work, he finally developed a new faster, high-performance industrial synthesis method capable of producing an active ingredient 100% free from impurities or byproducts, to be used in high quality cosmetics or medical devices for topical use.

NICOMENTHYL® was born. Unlike “Cryotermol”, “Vitanim”, “Nicoment”, etc. NICOMENTHYL is not a mixture but a highly pure substance with one single INCI name, MENTHYL NICOTINATE, and one single CAS number 40594-65-8.

It was no longer a mixture of nicotinates, menthol, and various terpenic substances, but one single liquid, transparent, and almost odourless substance, with a boiling point at 292.23 °C and a very high purity level, as confirmed by the gas chromatographic analysis. 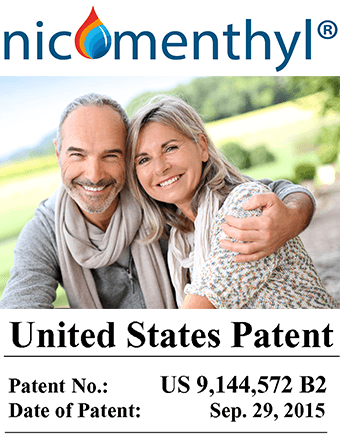 This discovery was followed by the Italian, European, and American patents (all granted) for the use of menthyl nicotinate in topical sexual stimulation preparations for both men and women.

Also an International Patent (pending) has been filed on this new revolutionary method of synthesis of Menthyl nicotinate.

THE PRESENT AND THE FUTURE

NICOMENTHYL has still a lot to offer to the cosmetic and dermatology pharmaceutical industry.
Today, the improvement of its synthesis allows us to present to the market with a unique, high-quality, safe, and effective ingredient. A new revolutionary activating agent for the stimulation of cutaneous microcirculation, tested and certified as non-irritating to skin, eyes, and mucous membranes, non-sensitising, and non-genotoxic (CLP declassified).

Those who strive for excellence will find in NICOMENTHYL the perfect partner, as it is:

To find more about all the features of this incredible molecule, read the article on Cosmetic Technology and the various data sheets.