Menthyl nicotinate is a new, revolutionary substance that can be used as an active ingredient in sexual recreational products, thanks to its ability to penetrate through the skin barrier, optimize the interconnections between skin and nervous system and activate skin microcirculation significantly (cf. figure 4), without causing any annoying hyperemia or irritation. On the contrary, it produces a dual effect, i.e. modulated vasodilation and a pleasant hot-cold sensory effect in the area of application.

Once absorbed in the skin, menthyl nicotinate is readily hydrolyzed into its two initial components, niacin and menthol (cf. Figure 5). 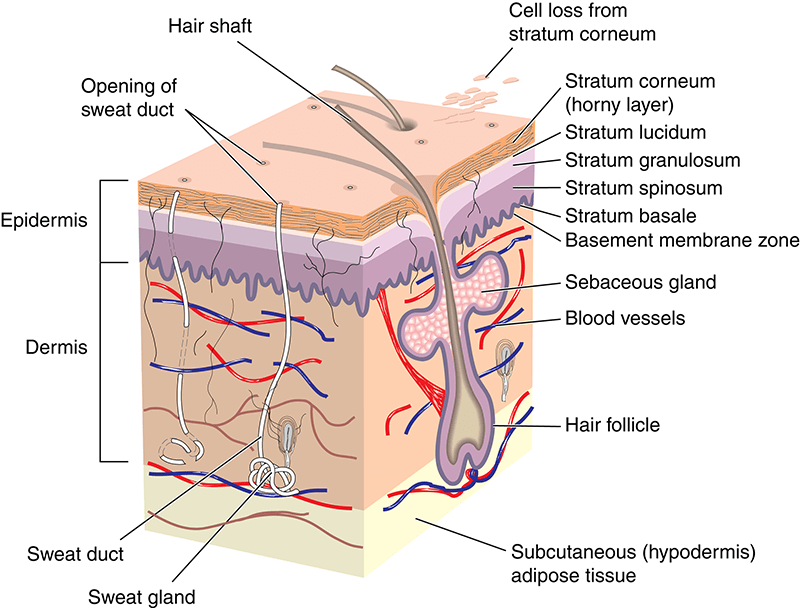 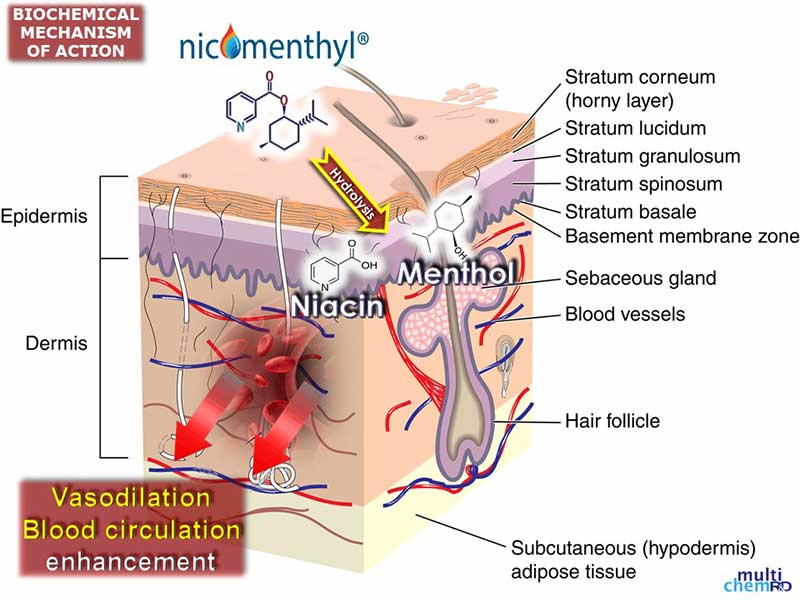 In a healthy female body, the stimulation/vasodilation function and the production of vaginal lubricant are physiologically concurrent and integrated.

“The postulated increase in blood flow to the clitoris is associated with increased sensation and enhanced sexual arousal including increased vaginal lubrication and labial engorgement.”2

Therefore, it is the excitement phase itself that triggers the dilation of perivaginal arterioles with the consequent sweeping of vascular transudate across the vaginal epithelium associated, almost simultaneously, to enlargement in the diameter and length of the clitoris and to the expansion of the upper half of the vagina. This explains why the vaginal lubrication is considered the primary physical signal of female arousal. Sexual excitement could then be summarized in the following interrelated functions: pelvic vasocongestion, vaginal lubrication and expansion, external genital engorgement.3

It is the stimulation of the very sensitive nerve endings situated in vaginal walls and surrounding tissues that causes vasocongestion and consequent production of lubricant transudate into the vaginal barrel.

Estrogen is the hormone responsible for maintaining the vaginal mucosa and allowing transudation and lubrication to occur.4

However, a continued lack of lubrication may lead to discomfort or even pain during sex, which may eventually be interpreted by her partner as a lack of interest and thus result in a distressed sexual relationship.

The numerous physical, psycho-social, emotional and/or relational causes of such situations are often very complex and composite. Therefore, they should be individually treated through the inter-disciplinary collaboration of professionals specifically dedicated to woman’s sexual health e well-being. There is however an extensive medical literature supporting the use of lubricants or topical products aiming at promoting or at least enhancing the sensorial characteristics and the related lubrication of the excitement phase. Such preparations are not exerting a pharmacological or metabolic function and therefore cannot be considered a definite solution in the treatment of FSD. However, they represent a valid supporting tool for the therapy, contributing to prevent the above mentioned impaired relationships and to restore sexual life to its original playful dimension.

In this regard, MENTHYL NICOTINATE (trade name NICOMENTHYL® 20) represents an active principle extremely interesting, usable in topical preparations for the prevention and treatment of vaginal dryness and generally indicated for all those subjects looking for a better sexual response.

NICOMENTHYL 20 is a multifunctional COSMETIC SENSORIAL AGENT, able to enhance skin microcirculation, optimizing the interconnections between the skin and the nervous system to intensify pleasure for deeper and more intense sexual performance and orgasm, with no irritation, no sensitization.

The following safety tests have been carried out on menthyl nicotinate:

All the tests above have confirmed the absence of irritating and/or sensitising effects on skin and vaginal mucosa.

Evaluation of the genotoxic potential of Salmonella typhimurium strains in the presence and in the absence of metabolic activation (Ames test). Nico-menthyl did not show any mutagenic potential.

The antimicrobial efficacy of NICOMENTHYL 20, i.e. its ability to inhibit the proliferation of microbial strains of different nature, pathogenic for humans, was assessed through a contact inhibition test on agar solid cultures. The following strains were tested: a Gram+ bacterium, Staphylococcus aureus, a yeast, Candida albicans, and Microsporum canis, a fungus. (S. aureus is a saprophyte of the skin, which can become pathogenic under certain conditions, such as immunosuppression, as C. albicans, whereas M. canis is a dermatophyte responsible for various forms of Tinea corporis).

The same test has been carried out on other 20 subjects of both sexes, with a mean age of 44,9 years, using a topical preparation containing 3% of NICOMENTHYL 20, compared to a negative control (placebo). Results are shown in figure 12.

It is to be noted that increases in microcirculatory flow values reached remarkable levels, i.e. +78,7% at 15 minutes, +147,1% at 30 minutes and +87,4% at 60 minutes after application, without any irritating and/or sensitising effects.

In conclusion, menthyl nicotinate, used in the recommended concentrations, represents an ideal and unique primary sensorial agent, a non-irritating and non-sensitizing effective vasodilator (as evidenced by safety and efficacy tests), biocompatible, beneficial to skin and through skin (releases vitamin B3 and menthol) and producing a long lasting unique exciting sensation.

To rediscover the purest and most intense physiological pleasure. Without side effects.